Who Were The Molly Maguires?

These lines are taken from a well-known folk-song made famous by the Dubliners and others. But who were the Molly Maguires?

The Mollies, as they were also known, had their origin in Ireland roughly between 1760 and 1850, where as a secret society, they and other groups like the Whiteboys and Ribbonmen, were engaged in agrarian violence against landlords and/or their agents with the control of land as the chief cause of conflict.

The Famine led to thousands fleeing Ireland and sailing to America. The Irish got a very bad reception in their new homeland and were often placed at the lowest level of society. They were often “welcomed” with such signs as: “No Irish need apply!” 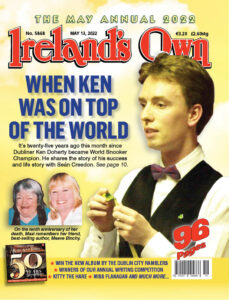 Thousands of Irish speaking, non-skilled and mostly illiterate Irish were attracted to Pennsylvania (PA) to work in the anthracite coal mines. Conditions in the mines were atrocious and the mine owners did little to improve things. Coal mining was dangerous and badly paid. In one mining district where there were 22,000 plus miners, 6,000 were children, some as young as six years!

The owners of the mines were mostly Welsh, English or German and from the outset, were seen by the Irish as perpetrators of injustice, thus causing friction between miners and management.

The so called “company store” was another grievance among the miners as workers had to buy their food and supplies from a store owned by the mine at hugely inflated prices.
Regularly the miners would end up owing the company store more than their wages as they had run up a tab and were not allowed to check the ledger.

Though there were deep rooted ethnic and sectarian rivalries among the miners, especially between the mostly Methodist Welsh and the Catholic Irish, nevertheless the miners organised themselves into a union, the Workmen’s Benevolent Association (WBA).

All miners, regardless of craft status, national origin or religious background were eligible to join the WBA.
During a very bad economic depression in the US in 1873, the mine bosses attacked the wages and conditions of the miners by lowering the pay rates by up to 20 per cent.

This led to a long seven-month strike which ultimately failed and the miners returned to work on the new pay rates. The union badly suffered. The families of the miners starved.

As the grievances increased so did the Molly Maguire retaliation when some Irish American miners turned to the tactics that had been used in Ireland against landlords and their agents. A number of mine officials were murdered, there were incidences of industrial sabotage and beatings and anonymous threats were carried out on people seen as hostile to the Irish.

From this time Molly Maguire society became more prominent and notorious in Pennsylvania.