Wild About Life – a chat with ecologist, Éanna Ní Lamhna

“I wouldn’t say to the children: ‘that’s a tree,’ I’d say, ‘that’s a chestnut, that’s a sycamore’ so there was no formal wildlife lesson, they just grew up with it.”

Éanna Ní Lamhna is talking about her three children, all adults now. Being one of the most recognisable voices on Irish radio when it comes to wildlife, Éanna has been teaching us – and her own children – about our natural world for many years. Her energy is infectious and her passion for and interest in the world we live in will be familiar to listeners of RTÉ’s Mooney Goes Wild where she shares her knowledge as a biologist and entomologist.

But how did the young girl from Stabannon in County Louth become a household name in all things wildlife and quite the trailblazer in many aspects of her own life?

“When people ask me when did I first get to like wildlife, I always wonder well when did you stop liking it?” smiles Éanna, in her distinctive lilt.

“Kids are always into little things – worms, bugs, birds. It’s the grown-ups that say ‘stop touching that, put that down, that’s dirty’ and what have you. 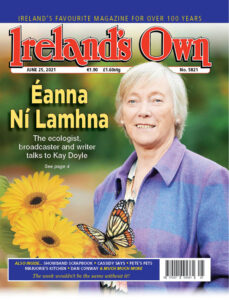 “I was the second of seven children. My father, Peadar, was the local schoolteacher. My son asked me recently what my own mother worked at – did she have a job? I said: ‘Excuse me, the woman had seven children and she lived in a house where they weren’t any mod cons like these days. Honest to god!’

And seven was a small family, lots of our neighbours had twelve and thirteen children, so there was no question of what did the mothers work at. They worked in the home and made a good job of it.”

“As a consequence of having so many children, my mother (Peggy) used to tell us to go out and play and don’t be annoying her and don’t come in unless you’re bleeding – none of this ‘he pushed me, she won’t play ball with me.’ And so we went off and played outdoors – we climbed trees, we played by the river, we knew where the birds’ nests were. This was all before television was even heard of, the late 1950s early 60s.”

It sounds like an idyllic childhood and Éanna was possibly quite the tomboy?

“We didn’t think it was an idyllic childhood,” she says, “We thought we just had an ordinary childhood like anybody else. You only discover afterwards when you grow up and go out into the world and meet people that others didn’t have a childhood like you. We thought life was boring – hanging the clothes out on the line for mother, bringing the baby for a walk, doing the ironing, making pastry. Looking back now you realise the value of it.

“As for being a tomboy? If climbing trees made me a tomboy, well guilty as charged and walking the top of the gate and walls,” she laughs as she fondly remembers those carefree days.

Éanna was interested in everything around her, including her schoolbooks and was fortunate that after attending St Nicholas’ National School in Stabannan, where she was taught by her father, she secured a scholarship to an all-girls’ secondary school, St. Vincent’s in Dundalk. She would soon see that being a girl in secondary school brought quite a different experience and expectation than the boys.