William Brown – Foxford man was founder of the Argentine Navy

Ireland’s William Brown and the Battle of Martín García Island

Declan McGarvey tells the extraordinary story of how the orphan from Foxford in Co. Mayo came to found the Argentinian navy and become its first admiral.

For a small island, Isla Martín García was fought over with remarkable frequency in the 19th century. Its enduring advantage, or eternal weakness – it depended on which side of the cannon fire one stood – was to be the gateway to South America for ships sailing the South Atlantic Ocean.

This great strategic value rested on a quirk of geography. As seen on a 19th century map the island’s location was at the tip of South America. There it rested on the River Plate, the widest river in the world at its mouth, where it empties into the Atlantic Ocean.

But the River Plate has always been an oddity. It has the shape of a gaping jaw, and though as wide as a sea at its mouth, upstream it shrinks to the size of a narrow channel a little over one mile in width.
Martín García spanned the centre of this channel like a guardian. For just to its north two more great rivers converged. Named the Paraná and the Uruguay, these rivers were the shipping pathways to the continent’s vast interior. 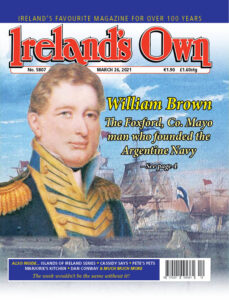 Their gateway Martín García bristled with the cannons of the colonial ruler, the Spanish Crown.
Admiral William Brown of Foxford, County Mayo, was only too aware of this when masterminding an attack on the island in March 1814. Preparations for the attack took place at his large waterfront villa in Buenos Aires, a prosperous port city overlooking the River Plate that had fallen to anti-Crown forces in the years before.

Brown, once an orphan, had acquired a large chunk of land on which to build the villa. The property was sober in appearance, unlike the showier mansions of the waterfront, and here Brown received guests of standing and rank.
They included the ambitious and zealous Carlos María de Alvear and Juan Larrea, two of the leaders of the Independence war with Spain. With the land campaign of their war in full swing since 1810, both desired the opening of a second front on the River Plate, to break the Spanish Crown’s stranglehold on sea access to the continent.