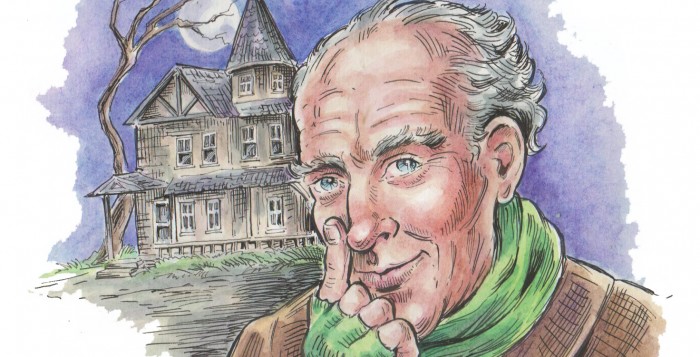 The House At The End Of The Street

I live in a small town in Ireland. It’s a safe environment; in fact, nothing really happens here. My sister and I are originally from Brooklyn, in New York. We moved to Ireland after a break-in near our apartment. Mom knew the person. It was terrifying, and Mom feared for our safety. I was only six, and my sister, Tanya, was nine.

Dad didn’t want to scare me so he told me that we were going there to be closer to my grandfather on Mom’s side, in his old age.

Tanya told me the truth on the plane, and Mom said that it was safe and happy there. I agree.

My grandfather is tall and scruffy. He has a pasty, grey face, wears dark trousers, boring sweaters and has a few teeth left. He also has bushy eyebrows over his bright green eyes. To be honest, when I met him, I was terrified of him.

He doesn’t live with us. He does spend a lot of time with us but insists on going home every night, at eight o’clock.

Something about him is mysterious. For example, we have never been to his house, which peaks my curiosity.

One afternoon it was warm outside. I came home from school to find Grandfather pacing back and forth, twiddling his thumbs and clicking his tongue. He was obviously bored.
“Tanya, why don’t you and your grandfather go for a walk around town while I start cooking dinner?” suggested Mom. Tanya moaned, and looked at me.

Grandfather told me that when he was a lad, he lived around here. “Why don’t you want us to visit you at your house?” I asked.

I never heard the reply as Grandfather’s head turned to greet Lily. Lily was our neighbour. She was wearing a light sweater and a long, red skirt. She had that elderly people scent, mixed with cheap perfume.

“Lily! How are you?” Grandfather asked enthusiastically.

“Ah sure, I’m grand, grand now.” You know when you’re shopping with your mom and she sees someone she knows and they end up talking for ages? This was one of those times.

“I’ll see you, Lily,” Grandfather said, blowing her a kiss. She blushed and walked on.

We were at a crossroads. I started walking one way but then I saw Grandfather walking another way, so I quickly followed him.

“Where are you going?” I asked anxiously. “I thought ye wanted to see where I lived,” he smiled.


We went down a steep path and I saw a road. There was only one house at the end of the road.

It was quite dark at this stage and a breeze caused some branches to shake. The closer we got to the house, the more nervous I felt. It was huge and crooked and gloomy.
Grandfather fumbled through his pocket to get an old skeleton key. He tapped his nose with his finger as if to say “our secret”.

I had seen this hundreds of times in movies and the people always end up the same. Dead.

I was so scared that I was shaking. I was prepared for anything. Bats, ghosts, zombies, you name it, but what happened next, I was not prepared for.


The door creaked open to reveal a beautiful home. Instead of old creaky stairs, there was a lift. No creepy paintings or statues, just framed photos and Mom’s trophies from school.
Best of all there was no freaky little girl. There was Cailín, my grandfather’s maid. This place looked like a hotel.

My grandfather told Cailín to take a break while we chatted. I talked with Grandfather for ages.

He told me about the house. It turns out my great-great-grandmother was quite wealthy.
She grew up in this house, and it had all their great gadgets. She didn’t trust people because she was worried that people would only like her for her money. She met my great-great-grandfather when she was twenty, and the two were inseparable. When he died, she soon followed and left the house to her only grandchild – my grandfather.

He had an artist design the outside of the house so that it would look old and worthless.
I told him that we should head back so that my mom wouldn’t worry. We both wanted to stay but we knew that we should leave. We trudged down the road and turned for home.
When we reached the door, Grandfather turned to me and said, “This is our secret.” I was torn. I really wanted to tell Tanya, but I agreed.

We got back just in time to hear the end of Tanya’s temper tantrums because she couldn’t get the latest iPhone. Mom just ignored us and called everyone for dinner. I wolfed down my chicken and spuds.

“So how was the walk? Did you see anything cool?” my mom asked.
“Nope,” I replied. I turned to grandfather and tapped my nose. He smiled. Obviously glad that I knew his secret.

Owen and the Mummy’s Curse