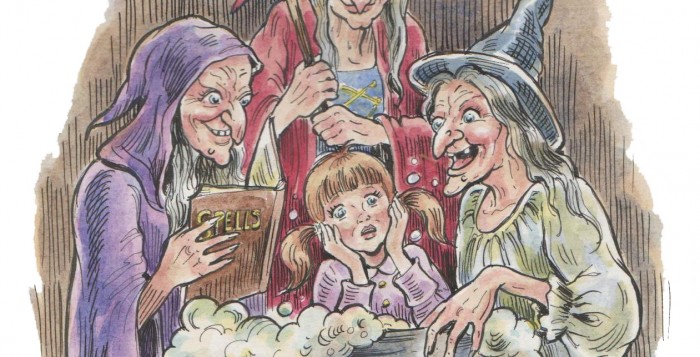 The House At The End of The Road

“We’re home again, Grandma,” yelled James, as they ambled through the door.
“Children, you must have been frozen to death out there,” worried the frail old lady. “Come sit by the fire and I’ll get you some hot chocolate.”

It was Hallowe’en night, and the dense fog hung low over the calm street. April sat on the deluxe cream couch that was placed just beside the roaring fire.

“Thank you, Granny,” she smiled, as she was handed a mug of hot chocolate.

“Dares?” smirked James, with a sly twinkle in his eye, as soon as his grandmother had left the room.

April nodded, and sat on the wooden floorboards beside him. “I dare you…” he grinned mischievously, pausing to take a tiny slurp from his beverage, “…to go in to the house at end of the road.”

“What?” exclaimed April, “are you insane?”

“I heard that evil spirits live there and possess children!” hissed April.

“Has anyone come back out of the house to tell you that?” inquired James.

“Fine!” April agreed, flinging on her lilac coat, “but you are doing my laundry for a month!”

“Hello?” April yelled hoarsely, as she crept through the mansion cautiously.

She scanned the dim room briefly, and saw the wood louse-infested staircase with the coarse ebony carpet. She staggered up it, and saw a huge balcony with its dark curtains swaying gently in the soft breeze.

She could see the amorphous image of a dreamy moon through the thick fog. She stood still, taking deep breaths of cool air into her lungs. Suddenly, she heard a sinister cackle boom from the dark sky.

The gentle breeze rose into a vexed storm that battered against the fringed window panes all around her.

April leaned over the balcony’s edge and saw swarms of broomsticks zooming through the air. “Witches,” thought April. She hear the great oak door burst off its hinges and a gang of witches barge into the room. April stood there, paralysed with a mixture of fear and excitement.

The witches gathered around a long table, helping themselves to spoonfuls of toad eyeballs and platypi liver, which according to the scrawny witch chef was the best meal she had cooked up in her cauldron.

“Quiet!” thundered an obstreperous witch, as she thrust her broom on to the cold floor.
“Being a witch sucks!” she screeched. “Everyone hates us. Have you ever heard a story where the witches win? No. I don’t know about you but I have had enough of this codology!” She then took a deep breath and sat down calmly.

“I agree,” shouted a witch from the rear end of the table. “Do you know how many frogs I spent on plastic surgery since that wretched Dorothy dropped her house on me?”
“Yes,” screamed another, “that revolting prince took Rapunzel off me.”

“We should rebel,” roared the witches from ‘Hocus Pocus’. Sarah was now on the wooden table kicking and punching the air viciously.

“Too right,” bellowed the Witches of Eastwick.

“Maybe we could just try being nice?” squeaked the tiny voice of Sabrina the Teenage Witch. All eyes faced the pretty little girl.

“Be quiet, you silly princess,” spoke Jadis, the Witch of Narnia. “You shouldn’t even be here.”

“Wait, wait, that might actually work,” shouted the Wicked Witch of the West. “At midnight, grab your wands and broomsticks and throw them in the bonfire I will provide for you in the back yard. Finally, the whole world will like us! From now on, I am the Wonderful Witch of the West!”

The other witches stared at her with utter disbelief. April stood flabbergasted. “Witches turning good!” she thought. Anger bubbled up inside her, and all of a sudden she found herself scolding the witches for even suggesting such a vacuous idea.

“I know you didn’t win in every book or movie but without you there would be no story!” she exclaimed. April saw a nod of agreement spread like a virus through the lustreless room.

“Well, I suppose Mr. Shakespeare would have found himself in a right pickle if it weren’t for us,” the witches of MacBeth cackled.

“Yes,” smiled April. “Don’t let the likes of Dorothy, meddling children or princes bring you down.”

“The movie ‘Snow White’ would be a bore without me in it,” declared Queen Narissa.
“So let’s continue our wicked ways,” barked Malificent.

Soon the whole room was whooping and screaming with joy. “I knew you would understand,” smiled April. Then all eyes turned to her and grinned viciously…

…As April sat at the bottom of the cauldron with lumps of strange ingredients being dumped on her, she wondered if it was the best idea to help the witches after all!