Wogan was a great friend of Ireland’s Own

The death last month of iconic broadcasting star, Terry Wogan, was widely mourned throughout Ireland and Britain and warm and heartfelt tributes were paid by everyone from heads of state to a great number of his regular listeners, many of whom came to regard him as a friend over the years. 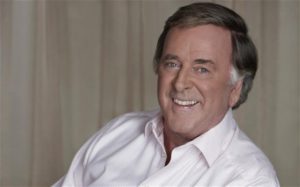 We also mourn his passing here in Ireland’s Own; despite the exalted status Terry came to enjoy, he never forgot his roots in Ireland and in Limerick, in particular. He was always very helpful and obliging to us when we sought interviews and comments and we were delighted to feature him some years ago as the cover story in our Christmas Annual.
A warm, friendly and kindly person, he mixed easily in the company of royalty and state leaders, but he never lost the common touch and was liked by almost everybody. There was no false front put on by Wogan – what you heard on the radio or saw on the television was the real person and this was appreciated by his millions of listeners.

The world of showbiz and celebrity is not always known for its sincerity, with rivalry, petty jealously and backbiting the more common currency. But even here, Wogan was widely admired and the tributes to him following his death on January 31, aged 77, at his home in Buckinghamshire, in England, were heartfelt and genuine.

Michael Terence Wogan was born on August 3 1938, in Limerick city. He worked in a bank for a few years from the mid 1950’s on after ending his education at Belvedere College in Dublin. He answered an advert for a job as a newsreader and announcer in Radio Éireann, based at the GPO in Henry Street, and so started a major shift in his life.
It was a changing time in Ireland and a new breed of broadcasters was taking over at the rather stilted and stuffy studios – Wogan had as his colleagues people such as Gay Byrne, Mike Murphy, Brendan Balfe, Bunny Carr, Larry Gogan and others who went on to become household names to generations of Irish people.

These introduced a new element of fun to the airwaves, and Wogan was a leader in much of the fun and pranks behind the scenes as well.

Mike Murphy recalls how he was making his first radio broadcast as a very nervous young man; midway through a jug of cold water was poured down the back of his neck – he had just been initiated by Wogan!

And, of course, an exciting new era of television was being introduced at this time too. Wogan cut his TV teeth on the still remembered Teilifis Éireann Jackpot quiz show before he headed off to England and the BBC in 1967 where he was to carve out a stellar radio and TV career over almost 50 years.

His career has been dealt with in detail in many tributes, but I would briefly sum it up in four distinct parts:

1 – His morning radio shows, many would say, were the best part of his broadcasting career. He chatted and ad-libbed and joked with his millions of listeners and made them and their reactions an integral part of the show. His was the distinctive morning voice of the BBC and he was Irish, and his regular presence did much to soothe any anti-Irish sentiment provoked by bombing and other incidents during the troubles of the 1970s and 80s.

2 – His TV chat shows, where he showed the same quick wit and a casual conversational approach that usually charmed guests and viewers, though he did meet some sticky and less than co-operative customers.

3 – His commentary on the Eurovision Song Contest on both radio and TV for the BBC for almost 40 years where he introduced a whole new lighthearted, irreverent and sometimes downright cynical approach which many enjoyed much more than the actual contest itself.  His role in recent years was taken over by Cork born, Graham Norton.

4 – He was an integral part of the massive BBC fundraising shows for Children in Need for nearly 35 years, not only in presenting the long telethons, but also in promoting the cause in any way possible, raising an unbelievable £1billion. He last did the show in 2014 and it was the first real indication that all was not well with him when he had to quite suddenly stand down just last Autumn for the first time in 35 years. His role was taken by Dermot O’Leary, whose parents are from Wexford town.

Terry Wogan has been showered with honours over the years, including a Knighthood from Queen Elizabeth, and his native city did not forget him – he was made a a Freeman of Limerick City in 2007 and he received an Honorary D.Litt. degree from the University of Limerick as well as a special lifetime achievement award.

Terry Wogan was a unique one-off; he has created a special niche in broadcasting and in the affections of all the diverse people of these Islands; not a bad legacy for the man from Limerick. We say thanks for his kindess to Ireland’s Own over the years and extend the sympathy of ourselves and all our readers to his beloved wife, Helen; daughter Katherine; sons, Mark and Alan, and to his five grandchildren.