Hello and welcome
to this week’s issue of Ireland’s Own.

We are pleased to present this year’s Valentine’s Special this week. In our cover story Eugene Dunphy writes about how Johnny Cash’s love affair with Ireland resulted in him penning the classic ‘Forty Shades of Green’.

For years courting couples had a recognisable landmark where they met on Dublin’s O’Connell Street. Anne Frehill tells the history of Clerys’ department store which stood like a beacon in the heart of the capital.

“One survivor who reached the shore did so clinging to the carcass of a dead cow. Another managed it by climbing into the brass band’s bass drum and riding the waves…” Liam Nolan recalls how the PS Lady Elgin sank to the depths of Lake Michigan, with most of those who perished from Milwaukee’s Irish communities in the second part of his new series ‘Deadly Shipwrecks the World Forgot’.

Long before ‘Fantasy Football’ became a reality, children on both sides of the Irish Sea lost themselves in the weekly adventures of fictional Melchester Rovers star Roy Race, writes Sean Egan while Eugene Dunphy tells how a high-ranking British official hired an agent from central-Europe to infiltrate Irish radicals in New York in his piece ‘A Polish Spy Among the Fenians’.

In part 16 of Maolsheachlann O Ceallaigh’s ‘Irish Priests’ series, he tells the story of the Irish priest who climbed the steps with King Louis XVI before his execution in France in 1793, while in the History of the Irish Town, Denis J. Hickey is off to Birr, County Offaly.

Seán Creedon looks at John Giles’ record as manager of the Republic of Ireland and he also wishes the legendary Charlie O’Leary who was a familiar part of Jack Charlton’s dressing room team a happy 99th birthday.

Claire Keogh explores the origins of the popular romantic Irish ballad, Carrickfergus, while Francis K. Beirne looks at the links between Saint Valentine and Ireland. Shortly before his death ninety years ago, Victor O’D. Power explained how beautiful Kitty Keevane became the old woman of the road ‘Kitty the Hare’. Fans of her stories will not want to miss this!

We have all this for you to enjoy alongside favourites such as Cassidy Says, Miss Flanagan Investigates, Dan Conway, columnists Mary Kennedy, Michael Lyster, Eddie Ryan and Alex Dobbs. Maxi remembers the late singer Karen Carpenter; John Joe McGinley has the last instalment in his series ‘How the Irish Helped Build Canada; Fats Domino features in the ‘Rock ‘n’ Roll Hall of Fame’, we have jokes, songs, puzzles, pen pals, competitions and the winners from the remainder of our Christmas Annual competitions plus much more.

I hope that you enjoy this year’s special, and of course Valentine’s Day, and I will look forward to talking to you all again next week. Until then, take care.

Eugene Dunphy charts the life and times of the Man in Black, and examines his links to Ireland. ...

Francis K. Beirne explains why February 14th is a red-letter day for many Irish couples   ...

“I’ll Meet You Under Clerys’ Clock”

For years courting couples had a recognisable landmark where they met on Dublin’s O’Connell Stree...

The Story of Roy of the Rovers

Long before ‘Fantasy Football’ became a reality, children on both sides of the Irish Sea lost the...

A Polish Spy Among the Fenians

Eugene Dunphy tells how a high-ranking British official hired an agent from central-Europe to inf... 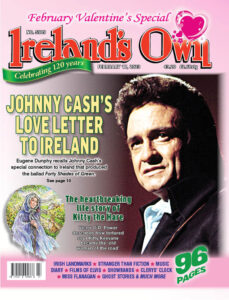