The Irishman Who Saved Liverpool F.C.

When Jurgen Klopp’s Liverpool won the 20/20 Premier league title, it ended a 30-year long wait for success in British football’s biggest competition. Anfield’s European nights are the stuff of legend for what is one of the most storied clubs in world football history.

It would be hard to imagine a football world without the ‘Pool’, but it almost happened. Liverpool F.C. owe their existence to an Irishman. His persistence and quick-thinking would set them on a course to world football domination… 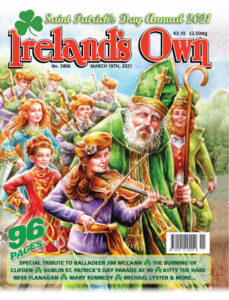 It was a journey taken by many as they fled starvation and certain death. Eighteen years after the end of the devastating famine, a boy from Monaghan, aged fifteen, boarded the ferry on the well-worn route from Dublin to Merseyside.

‘Honest’ John McKenna journeyed in the hope of a better life. He had no idea at the time, but his journey would change the face of world football forever.
When McKenna landed in Liverpool, which was not officially a city in those days, it was a bewitching place of both staggering wealth and incredible poverty.

The cholera epidemic was rife on the narrow crammed streets, and narrow alleyways. The rich, mainly merchants, were making significant profits from the trade of slaves, cotton, and tobacco.

With over half a million people tightly packed like sardines, Liverpool was a suffocating place of sometimes relentless suffering. The decision to build a park to offer some much-needed breathing space would have huge implications for the future city, and John McKenna.

John found work as a vaccination officer and played rugby in what was then Liverpool’s most popular game.
McKenna befriended a man named John Houlding. Houlding owned some land on Anfield Road. Everton F.C. agreed to rent the land from him.

Everton had been formed as the city’s first professional club in 1878, with their matches being played on Stanley Park. However, in 1882, a new FA rule meant that they could only play on a pitch surrounded by an enclosure.
History would thus decree that Anfield was actually the first official home of Everton F.C.!