Strange Sighting in the Donegal Sky in 1910

Once upon a time, our ancestors would glance up at the endless pinpoints of light in the sky and feel at one with the cosmos.

Today, our skies are so obscured by light pollution that we’re lucky to see anything at all, and any streak across the sky is as likely to be a drone or a broken satellite as a shooting star. 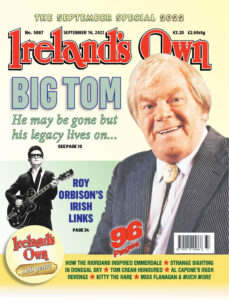 Nonetheless, the search for “unidentified flying objects” remains relentless. Few, however, are aware of an incident which occurred in a remote part of Donegal, long before the term UFO had been coined.
It began as a pleasant spring evening, at the edge of summer, on Oileán na Dumhcha, a small fishing village at the very north-western tip of Ireland, the Inishowen Peninsula.

As the men of the village, farmers as well as fishermen, prepared the ground for crops, the shape of an enormous steamer began to form on the horizon. As it drew closer, the men realised that whatever was surging towards them at a rate of knots, it was like no vessel they’d ever seen.

Its speed was quite incredible, faster than anything they’d witnessed in their lifelong experience of the sea. Even more striking was the enormous column of blue vapour the vessel was throwing up around itself, a curtain of spray so high it touched the low-lying clouds.